he Mozu Tumulus Cluster is a group of ancient tumuli in Sakai City, extending for approximately 4 kilometers (2.5 miles) in every direction. It originally contained more than 100 tumuli built during the Kofun Period (ca. 300 to 538), but due to Sakai's rapid urbanization and other factors, many of the old monuments were lost, and now 44 tumuli built between the late 4th century and early 6th century remain. This cluster includes one of the world's largest tombs, the Tumulus of Emperor Nintoku, as well as other massive keyhole-shaped tumuli, making it an important heritage for preserving Japan's ancient tumulus culture.

A tumulus (plural: tumuli) is an ancient burial mound serving as a tomb for a king or other person of power or status in their time. The Tumulus of Emperor Nintoku is, along with the Great Pyramid of Giza and the Mausoleum of the First Qin Emperor, one of the world's three largest tombs. It measures 840 meters in length (just over half a mile), is surrounded by triple moats, and has an out-perimeter circumference of 2.7 kilometers (about 1.7 miles). Although tumuli vary widely in shape from country to country, large tumuli such as that of Emperor Nintoku are meant to symbolize a person's influence and power, and thus they can be found all around the world. The Mozu Tumulus Cluster, a UNESCO World Heritage Site and where Emperor Nintoku's tomb is located, is said to be more than 1,600 years old. It's impressive that, despite how much time has passed since their construction, tumuli can still be found in the middle of this huge urban area. 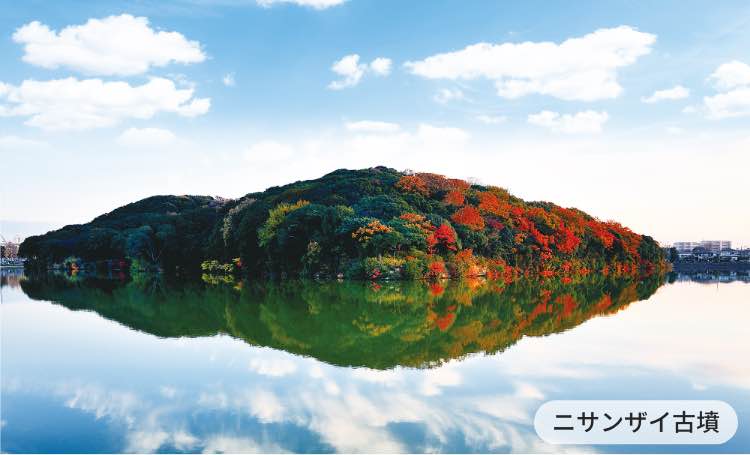 The Tumulus of Emperor Nintoku is often depicted using aerial photography, as its massive size makes it difficult to view the tomb's overall form from ground level. We recommend using the free observation area on the 21st floor of Sakai City Hall, which is located near Sakaihigashi Station on the Nankai Koya Line, in order to get a better view of this tumulus. From this location, you can see it sitting like a forest right in the middle of the city, as shown in the photograph. If you wish to see the tumulus from ground level, only the central prayer area is accessible to the public. But there's a way to see more: Stop by the Mozu Tumulus Cluster Visitor Information Center where ultra-detailed, 8K-resolution aerial photographs can be viewed. You can also utilize state-of-the-art virtual reality technology at the Mozu Tumulus Cluster Theater in the Sakai City Museum to explore for yourself the wonders of Emperor Nintoku's tumulus and other tumuli in the area.

To learn more about the other tumuli in the cluster, take some time to explore the 44 tombs of various sizes scattered throughout the area. In addition to varying in size, the tumuli come in various shapes and some can even be ascended on foot. Each offers its own unique experience! Emperor Richu's tumulus, for example, is the third-largest tumulus in Japan, yet it has just one surrounding moat which enables visitors to better view it from various different angles. If you plan to explore the various tumuli of the Mozu cluster, stop first at the Daisen Park Tourist Information Center to gather information on the area before setting out. 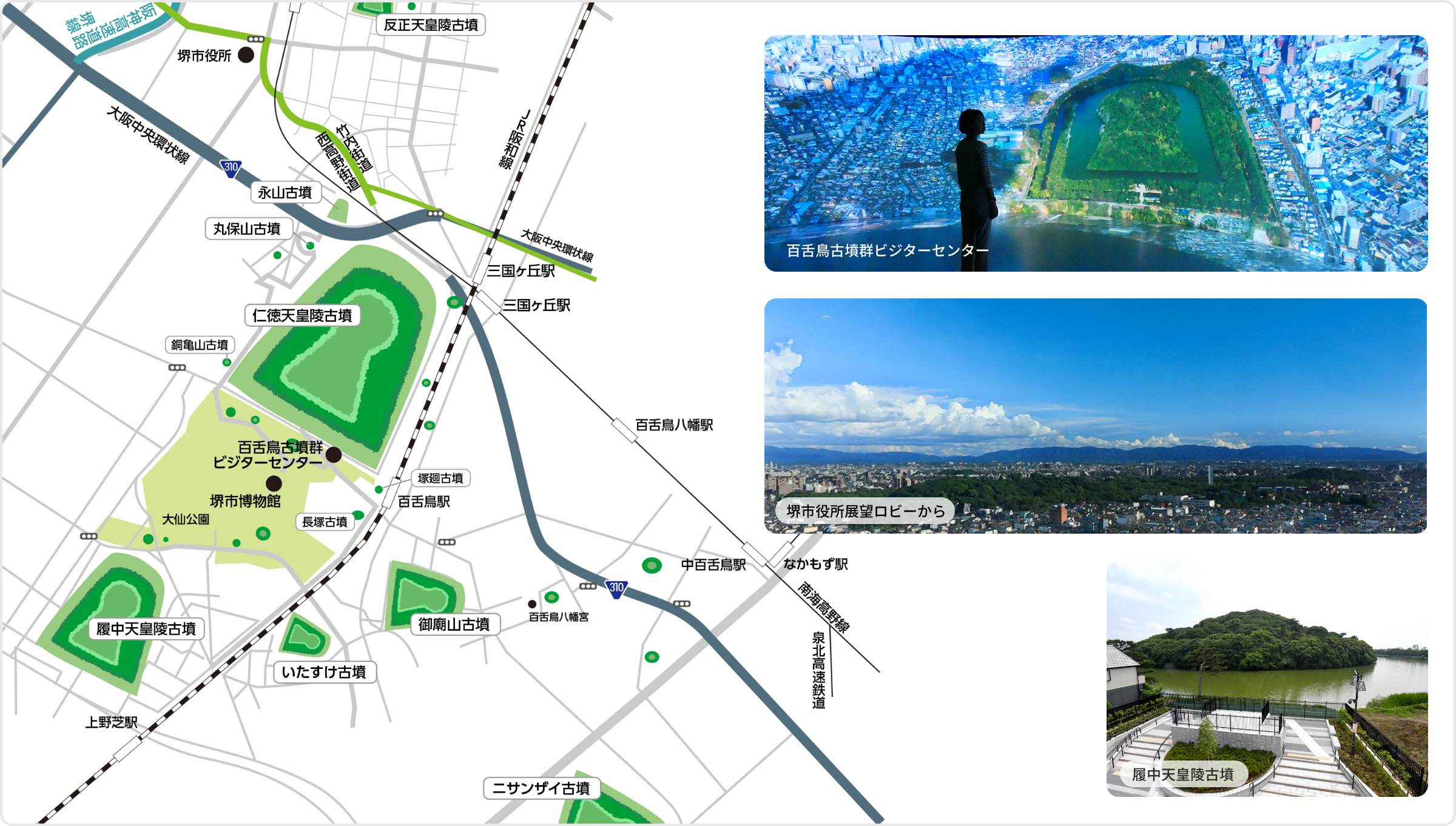 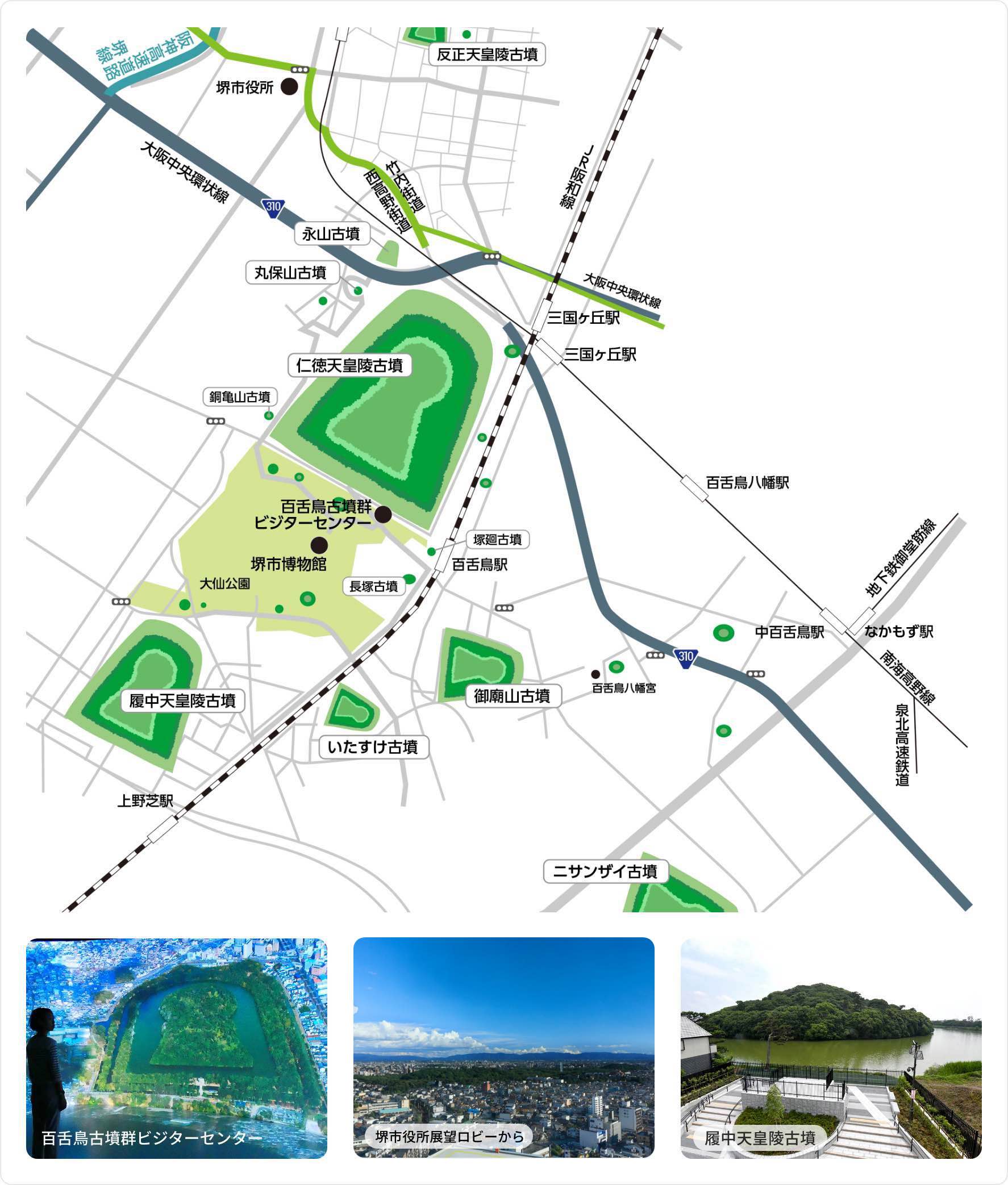 While exploring Senshu's impressive tumuli, you can also check out nearby shops for local sweets and goods inspired by the tumuli themselves, or even try your hand at local crafts rooted in the town's history. Pick and choose the destinations which interest you to complete your own perfect itinerary! And if you want to see everything there is to see, you can rent a bicycle from Daisen Park or other locations.